Special thanks to Talky Tina for the creating the template for this list, and for honchoing the Creatorist Certification program!

The challenge for The Daily Create tdc1983 was to make a panoramic selfie with myself appearing twice. The “traditional” method involves having another person take the panoramic picture, pausing in the middle while you (me, the subject) moves around behind the photographer and reenters the image as the photographer continues to pan.

However, liking to work alone, and liking to try different methods, I chose the PANO-sabotage method. Generally, this involves various waving, flipping, snapping, and other hand gestures and movements while in the panoramic mode. With some thought and control, one can achieve very interesting results. There will often be artifacts of the process, such as slicing of the image, unusual repetitions, and occasionally vertical lines dividing the image into a surprising diptych.

For this one, I went into my back yard on a bright almost-summer morning. Holding the iPhone at arms length, with the front camera aimed at me, I started the panoramic photo. As I carefully rotated the phone, I also slowly moved myself in the opposite direction. This did two things deliberately (maybe more accidentally): put a different background for me so I am “cloned” in tow different spots; and actually got me into the picture the second time. It is pretty difficult to make a panorama greater than 180, and especially to go a full 360. By moving, and some care in the speed of rotation, I was able to pan somewhere between 180 and 360 degrees.

You can check out many other examples of the PANO-Sabotage technique at the excellent PANO-Vision  group on Flickr.

One day months and months ago, I saw an image on Flicker that led me to a group called PANO-Vision. This group is dedicated to creating an art form from what they term PANO-sabotage, the deliberate use of odd motions, flips, and waves while taking a panoramic photo. It turns out that not all brands and models of phones and cameras are suitable for this technique, and the focus is on the use of iPhones.

To make the image I call Feet on the Ground Head in the Sky, I stood in my backyard on sunny morning shortly after sunrise, put my iPhone camera in panoramic mode, and started by aiming at my feet. Once I opened the shutter, I slowly rotated the phone (held horizontal) upward to capture the bushes and sky. As I reached the top of the arc, the length of the panorama was about at its end. I had to quickly snap my hand around to point the front camera toward my face.

It actually took several attempts to get this to work. Sometimes I waved the phone in an arc to come around to my face. What I experienced was the difficulty of extending a panorama past 180°. Yet, with a combination of slow and rapid hand motions, it was attainable.

Insider secret: my original image had cut off the top of my head. A bug/feature of this technique is that there are often rapid transitions made in the image that cut out or distort a section of the image. Part of the art of PANO-Vision is to take advantage of these artifacts. In this case, however, I preferred to keep my head, so I pasted in the top half from one of the unused attempts from this morning’s photo-adventure.

If you are interested in learning more, I recommend you study the work and read the commentary in the PANO-Vision group. To see more of my efforts, check out my album on Flickr called Pano and other distortions. Most effectively, try it yourself!

By the way, I made this particular image today in response the ds106 Daily Create prompt. This month is a 30-day challenge, but it’s not too late to join in. Even one day with an art project will boost your creative spirit!

I recently bought a VCR/DVD combo in order to preserve family recordings from a couple of decades ago. Initially, I am importing them into my laptop using the Power Director 9.0 program that came with the component video/USB adapter I bought. That works fine, but produces a MPEG-2 file, which doesn’t play well with many video players. So, I am using MPEGStreamClip to convert to MPEG-4. (I had to remove QuikTime and install a QuikTime substitute to be able to work with the MPEG-2 files.)

One of the old tapes was made by my then seven-year-old son. Using a camcorder as we were driving around looking at Christmas lights, he was learning to narrate his journey. As I started the conversion process, I noticed the first frame in MPEG StreamClip had a nice glitchy look to it. In fact, most of the video is black background with lights moving around in and out of focus. Before I continued the conversion, I used the Snipping Tool that Microsoft so kindly provided in my operating system to copy that first frame. 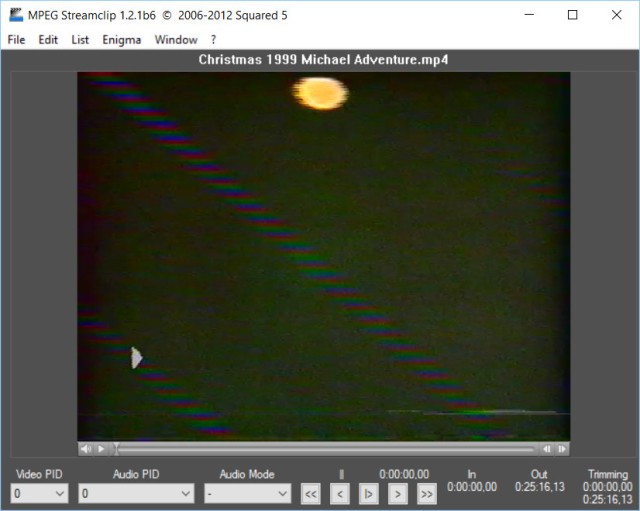 Now the fun began. Since the conversion takes many minutes, I decided to work with that frame snip and see what I could do. I use GIMP as my photo editing tool since it is free, open source, and reasonably powerful. Most of what I did for this image had to do with altering the colors. Playing around with Auto Color Enhance, White Balance, and adjusting contrast, and also inverting the colors, making changes, and inverting back, I was able to produce a range of interesting effects.

The animated GIF is easy to make in GIMP. Once you have the frames you want to use, export the file as GIF, select animation, and the frame-time you desire. I used 330 milliseconds.

The interesting thing to me is that the initial image, mostly black with a bit of color and light, actually has much pixel differentiation. By changing contrast, enhancing color and white balance, and other options, I was able to bring out sections of colors that weren’t apparent. Those colors weren’t necessarily there, but the original image contains the seeds for change.

The original frames (and more) can be found at my Flickr glitch and databending album.

In response to a word experiment on the Interwebz, I present my image Futzopublicus Bluephasify. 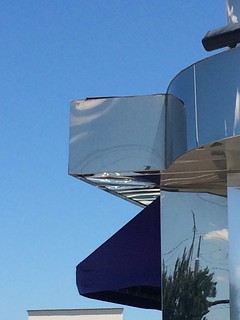 Talky Tina, here is my animated GIF of Gim Groom. I hope it is in time to allow you to give him up. I don’t know where you have him, but I’ve looked between New York City and Chicago and he keeps appearing somewhere in between.

Somewhere between Long Island and Chicago

So, Mariana Funes just posted about merging together an image of cogdog and another color gif to make an interesting animation. Well I don’t know what her original assignment was, but I had a few minutes to spare at lunch, so I thought I would play around.

Here is the link to her post, with the originals and her nicely abstracted animation.

Here is mine, with cogdog emerging within the animated background, maybe a magical way of communicating in the tapestries, like Sirius Black in the fireplace.

A little bit more playtime would lead to improvements, like gradually changing opacity values to have cogdog more visually emerging. Maybe wiggle his head? Maybe add color to his eyes? All kinds of possibilities.

Amendment: cogdog said he wants his head chopped off. This is the best I can do. (You might need to refresh the page to see the action.)