Alan Levine has often encouraged folks to tell their story of what connections are made when one chooses to share openly on the Internet. You can see many of his collected stories at http://stories.cogdogblog.com/.

Here is a story of my own, concerning a crossword puzzle, another Internet person I wouldn’t know if it weren’t for Alan, and an unexpected use.

Back in April 2014, GNA Garcia, a participant in the ds106 Digital Storytelling phenomenon, posted this picture to Flickr. Apparently she was solving a crossword puzzle in real-time communicating with or on ds106 radio with Rowan Peter in Australia. All I saw was a crossword puzzle that needed to be finished. 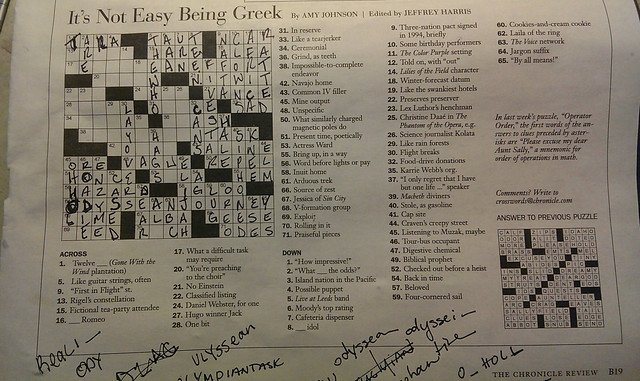 Rather than print it out, I imported the picture into GIMP, and used the text tool to insert the letters into the boxes. It took a little bit of playing with the font and size, but it met my needs. When I was done, I saved it to my own Flicker account, and gave GNA credit for the original. (Of course, the original puzzle had an author and editor, and was published in a paper. Those identities are noted in the images themselves.) 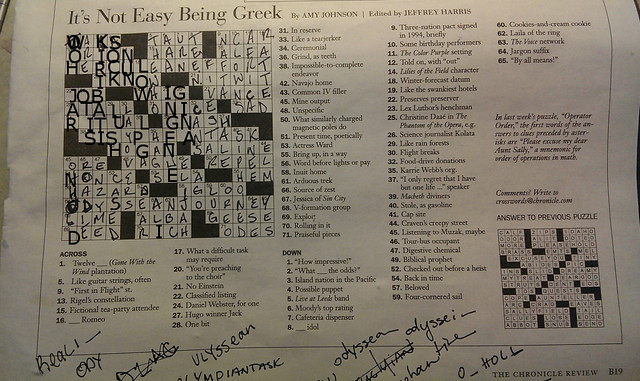 All well and good, this was fun with sharing on the Internet, and easily forgotten with time. But the story doesn’t end there. Last week I watched a TED presentation from Clay Shirky, during which he used the example of shared photos from thousands of individuals being sources for greater things. I got to wondering about my own pictures, so I performed a Google search using my account name, byzantiumbooks, and key words like picture, photo, CC, Creative Commons. The first one I found was this puzzle. (I have since found 26 pictures that were used and attributed. You can find them in an album at https://flic.kr/s/aHsk3s3C3G.  I have no idea if any were used and not attributed, but that is another story.)

Where was this puzzle being used? It was an article on how mental activity like puzzle solving can be used to delay the onset of dementia. This is a topic of interest to me as my Mom suffered from dementia in her later years. The article is here: http://www.everlastingplace.com/golden-years-a-blog-about-the-elderly/can-mental-exercise-delay-dementia.

So, a fun puzzle shared from one person to the Internet, completed and shared again, ends up giving hope of well-being to many.

Finally, what’s the connection between GNA Garcia, Alan Levine, and me? If he hadn’t presented about ds106 and the concepts of open educational resources at an online conference that I was encouraged to learn from by my own institution, I wouldn’t have been excited to join in on the ds106 action. GNA Garcia is one the longer-term participants, so I give Alan credit for introducing us.