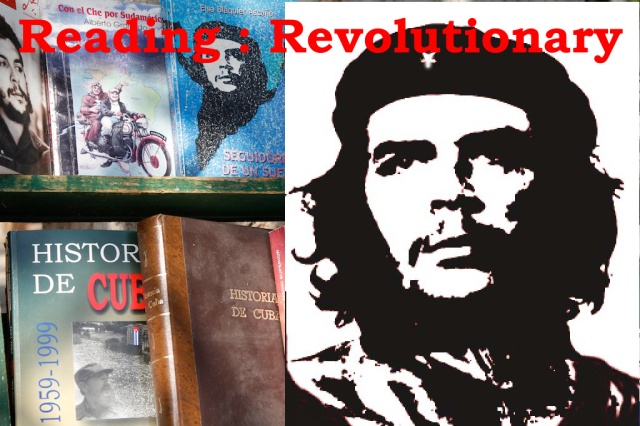 For Design Assignment 1089, we are challenged to create a poster featuring a famous person with a book. I have chosen to use Cuban revolutionary themed books (image on flickr cc by Bert van der Lingen) paired with a classic poster image of Che Guevara (image on flickr cc by Doug Wheller). I know that Che was a brutal prison administrator, overseeing the execution of political prisoners, and other mean things. But his image is iconic as a representation of Revolution. Perhaps Malcolm X would make a great image also, since he actually read and advanced his revolution while in prison.

I used Gimp to merge the two images together. For the text, I selected the Bookman Old Style font, because I like it and it is bookish.

This image is part of my personal history, also. I went to high school in a suburb of Miami, and was friends with many whose family had fled Cuba after the Revolution. The use of Che’s and Fidel’s image in the ’60s movements in the USA was somewhat of a contradiction for us.